CONGRATULATIONS TO THE MILLENNIUM FALCON, THIS YEAR'S WINNER OF THE WIKIA STAR WARS TOY BATTLE!

For many Star Wars fans, the movies and TV shows are just the beginning; it’s also all about the collectibles and -- of course -- THE TOYS!

To celebrate the upcoming release of the new Star Wars: The Force Awakens toy and merchandise line on Force Friday - Sept. 4, we asked fans to submit nominations to take part in the Wikia Star Wars Toy Battle!

Fans from the ‘70s and ‘80s have huge nostalgia for the old Kenner line of action figures and vehicle sets, while enthusiasts from the newer films and shows have their own cherished Hasbro favorites. From the nominees, we gathered 32 Star Wars toy favorites.

BONUS - SPREAD THE WORD AND WIN!

To make the competition more interesting, we're giving away FIVE mystery toys, provided by Hasbro from their Force Friday lineup! Plus we have THREE sets of both the Star Wars Rebels: Complete Season One Blu-ray/DVD (out 9/1) and the Lego® Star Wars: The New Yoda Chronicles (out 9/15). Want to win one of these awesome prizes?

Share this bracket on Twitter (use the handy buttons below to make it easier) using the hashtag #SWToyBattle, and you’ll be automatically entered to win!

Please note: Only U.S. and Canadian residents are eligible to win.

We'll randomly select the winners from all eligible entries on Sept. 25.

Check out this fun video we made featuring the Star Wars Toy Battle! Fans discuss their favorite toys as a child and which toys they would vote for in the battle. 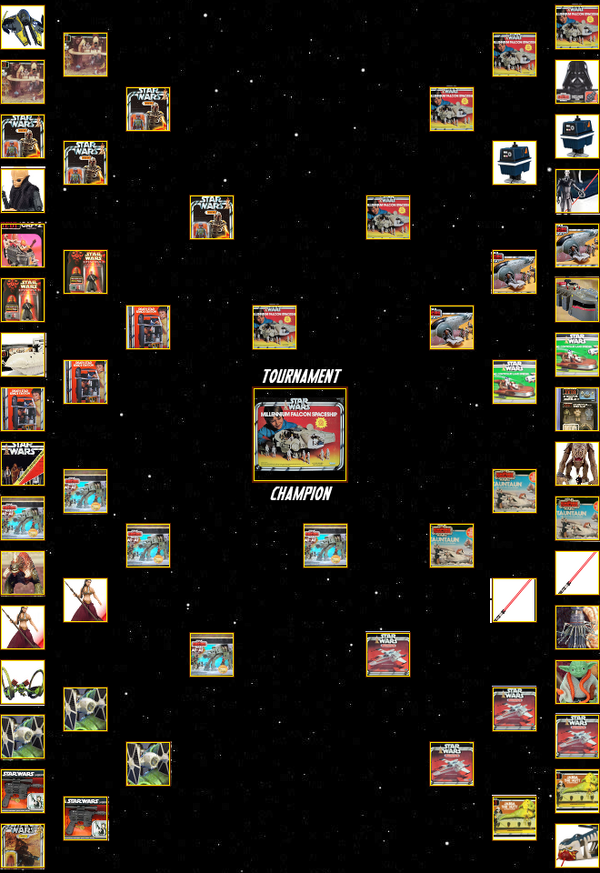 Retrieved from "https://swmerchandise.fandom.com/wiki/User_blog:Asnow89/Wikia_Star_Wars_Toy_Battle?oldid=66054"
Community content is available under CC-BY-SA unless otherwise noted.